Pet Scams – How to Avoid Them

Pet scams have scaled new heights during the past year as work-from-homers and people under lockdown fall for the companionship appeal of a furry friend.  The Better Business Bureau says its Scam Tracker service received more than 4,000 reports of fake pet sales during 2020, with the trend accelerating as the year progressed. The figure is five times higher than just three years ago, while total losses are six times higher at more than $3 million. 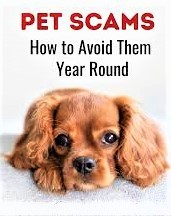 And remember, these numbers just relate to reported incidents. Many scams are never declared because victims are embarrassed to admit they’ve been conned.  Even people who don’t get drawn into the spiral of additional costs are losing around $750 a time, while the scammers use restrictions from the current health emergency as an excuse for refusing to let would-be buyers see their potential pet before they hand over the payment.

The International Pet and Animal Transportation Association (IPATA) says many pet sale scams begin with prospective owners searching online for free or cheap pets. This is where the crooks hang out. They tell their victims the pet is free or the price is extremely discounted, but they must pay shipping costs upfront.

“They almost always say they are only giving the pet away because their child passed away, that they moved for a new job and cannot provide enough attention for the animal due to work hours, or their new house won’t allow pets,” says IPATA.

Then the scammers start to pile on the pressure, saying things like the shipper insists the pet must be transported in a temperature-controlled crate. They provide fake paperwork to back up their claims, often using names of genuine shippers and government agencies and corresponding phony websites and email addresses.

Sometimes, the pets do exist — they’re stolen or illegally imported animals from Asia and Eastern Europe. Again, the scammers use fake paperwork and even false microchipping to try to pass them off.

If you’re considering buying a pet online, here are 7 things you can do to avoid getting scammed:

In addition, beware of genuine pet sales that originate in so-called puppy mills – large-scale breeding operations where animals are often kept in appalling conditions and frequently arrive with serious medical and psychological problems.

Horrific reports have emerged of unborn puppies being removed from the mother’s womb, so their size and growth are restricted, to meet the growing demand for so-called “teacup” tiny animals. They are the real victims of this crime, so, independently check out the breeder’s credentials and reputation.

Finally, although most pet scams relate to dogs (especially French bulldogs and Yorkshire terriers), more than 10 percent of them are for cats and kittens and a few for parrots and even exotic animals.

If you need assistance with this topic or any other concern, contact information for Seniors vs. Crime is available on our website at:  http://www.svcinthevillages.org/