VPSD – Thank You for Resident Support and Participation 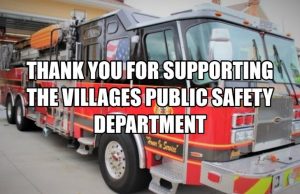 RESIDENT SUPPORT AND PARTICIPATION
WINS THE DAY for the VPSD!

Thanks to the overwhelming support and participation of The Villages residents, the Sumter County Board of County Commissioner’s voted unanimously on September 21 to retain two separate fire departments, Sumter County’s and The Villages Public Safety Department. Each department will be able to independently provide EMS and transport services.

This favorable outcome was also due in large part to the active support of both The VHA and POA, whose combined memberships include over 25,000 Villages residents. We will continue to provide updates as the logistics of this decision are worked out.

We want to thank Chief Cain and The Villages Public Safety Department for providing exemplary service to all residents of The Villages.  We also appreciate our District Manager, Richard Baier, for keeping us informed about this issue and other matters of concern and interest.

It is with great appreciation that I pen this article.  The Sumter County Board of County Commissioners (SCBOCC) heard the testimony of dozens of residents (and saw nearly 600 persons in the main and overflow meeting rooms) at their September 21 meeting.  After discussion amongst the Commissioners, there was a unanimous vote to retain The Villages Public Safety Department, as well as the Fire and EMS Department serving Sumter County.  Their decision to retain The Villages Public Safety Department (VPSD) with its unique and branded urban level of service was met with cheers from the audience in attendance.

The SCBOCC referenced the many letters (quoted as well over 1,000) from residents of The Villages as a part of their deliberation.  Their unanimous 5-0 vote included the provision of ambulance and transport services by both fire departments, and it was noted that there should be collaboration at all levels of both organizations as these most important medical decisions should be about patient care and the needs of our demographics (age 70+ per the most recent Census).  Following up on the words of a Commissioner, the District will be pursuing a Special Independent District which will ensure the most transparent form of fire control and rescue accountable to residents of The Villages.

On a more personal note, and as a resident of The Villages, I am proud to preserve the branding of our lifestyle which includes the services that our residents have come to know and appreciate—localized grass roots AED services, smoke detector change-out programs, car seat programs (when those grandchildren and visitors come to town) and CPR training, just to name a few.

Residents who have chosen to reside within The Villages (and we know that you could have chosen anywhere to reside) should expect the best from all levels of our government and VPSD.  I would be remiss if I did not express gratitude to the Sumter County Ad Hoc Committee for their hard work on the issues of Fire, Ambulance, and Transport Services.  These meetings over the summer months provided a sounding board for resident groups to participate within this important deliberation.

Over the coming months, the work on this issue has just begun and each of us as a steward of The Villages lifestyle must stay actively engaged with the processes as they impact the provision of services to our residents.