It was an appreciative and responsive crowd who attended The VHA’s Annual Awards Night at the Lake Miona Regional Recreation Center on March March 9th.  And with good reason.  From the “opening act”, featuring a great comedy routine by Mike Burke, to the inspiring stories shared by the award recipients, a warm and positive energy filled the room.  There were several standing ovations throughout the evening, and each one was well deserved.

Our Congratulations To The Award Recipients:

Accepting the award were husband and wife team Joan Bender and Richard Boyden, founders and directors of the organization that caters to the relationship and social needs between caregivers and those they are caring for.  While there are respite resources for caregivers, this unique approach is focused on recapturing memories and moments that were important to a couple or family before one of the many forms of dementia appeared.  It is a time for enjoying time, together.  For more information about their program and valuable dementia and caregiver resources, visit:  https://www.memorycafedirectory.com/Cafe-Connect/our-moment-cafe/ 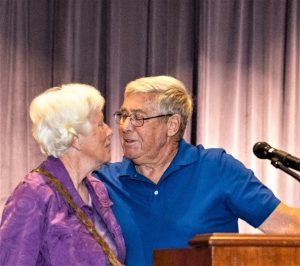 Bill has been an active and important force within The VHA as a past president and for many years as a volunteer and as the recently retired president of The VHA Helping Hands program that loans durable medical equipment, free of charge, to Villages residents.  He will never retire from being there for others, including his wife, Margaret.  In accepting his award, he promised to keep it short and sweet, but managed to regale the audience with wit and wisdom.  Of his years spent volunteering for the humane society, he quipped “Dogs don’t talk back”.  But of his time with Helping Hands, he shared the story of a gentleman who was confined due to not being able to afford a mobility scooter.  When one was donated, Bill made sure he got it, and as he returned from a test run down his street and back, the very happy gentleman summed up his joy in one word:  “Freedom!”  And according to Bill, in the true spirit of Don Hanfeldt, he has gotten “the most satisfaction from volunteering.”  Or, as Albert Einstein observed:  “Only a life lived for others is worth living. 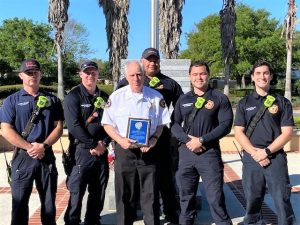 Chief Edmund Cain, along with the Station 51 VPSD crew, well represented the over 150 members of the department that services The Villages community.  This past year was a busy one for the department as they dealt with the continuing effects of the pandemic and addressed the critical issue of ambulance wait times.  The Chief detailed the next steps in the process of establishing The Villages as an independent fire district, plus updates on the timeline for taking over the important ambulance services.  We appreciate their dedication to The Villages residents and all the on-going work involved in making this the safe and healthy community we desire and need.